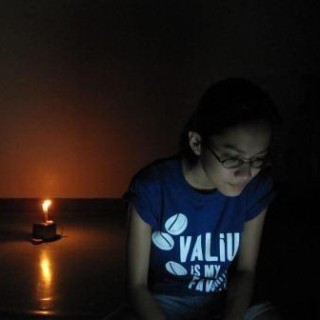 I don’t keep my blog site a secret. Though, I don’t overly publicize it as well.
But looking at the visitor and viewer stats, I figured that readers of my blog are very few… and mostly from countries other than mine.

So I was a little shocked to know that my mother has known of my blog, as per my sister. And I immediately told her to NOT read my blog (with a “please” of course).

Not that I have something to hide from her or that I’m feeling like a bratty/rebel teen asking for her privacy (because let’s face it, what’s the point of blogging about something if you don’t want others to read it, right?). But because of two reasons:

1. She will think I’m losing my mind.

I hoped that my blog would be an outlet to rant and release all stresses and unnecessary complaints of everyday reality. So I’m afraid my mother will think I’m starting to lose my sanity and will ask me to move back home or let me see a shrink or something. I just don’t want her to worry.
I once posted a very emo Facebook status and guess what? She called me up and told me not to be so negative. blah blah blah. And I told her, “Ma, relax. I’m fine. Uso lang ang emo sa social networking sites. (Being emo on social networking sites is a thing.)”. After that incident, I created a Twitter account.

Okay. Not only will my mother get to know all my mind grimes, she also gets to check my writing and grammar! I know I’m not the greatest writer in the world (She’s not either. HA!) but still… I can’t forget the day she read a draft essay I wrote back in college. And I got only two words from her: “So elementary!”. Talking about crushing the confidence of your child. HAHA. But she was right. Still… I may have cared 6 or 7 years ago… Now? Eh. So what!

Unfortunately, she’s already seen and read my posts. So, ma, if you’re reading this: “Peace! I miss you and I love you. Thanks for dropping by! Kisses. ;)”

**This post is in response to Daily Prompt: Keep Out.

It has been quite a week for our family.

Our grandpa-uncle just passed away.
Although he is the brother of my father’s mother, we called him “uncle” all our lives.
We never met my grandmother, but he filled that role to us.

More than that, he was like the godfather of the entire family.
Our very own Don Vito Corleone.

He was many things to each member of the family.
But what I will remember most about him is how he ALWAYS seem to bring the family together.
Even as we said our final goodbyes to him, I realized that he brought the family back together again.

Uncle was a man full of passions.
One of this passion is music. He sure had taste in music.
So this week, not only did the family got together with overflowing prayers and sympathies for him, but also with overflowing musical dedications.

The top 5 songs playing in this week of mourning were:

The first three were some of uncle’s favorites.
After All was sung in the interment.
And Bye Bye was a song performed by my sisters and cousins in dedication to him in one of the nights of prayer for him.

Every thing about this week was a mixture of…
… sadness and gratefulness,
… mourning and rejoicing,
… tears and laughter.

But as with all our family gatherings, it was filled with drama, love and music.

Till we meet again, Lolo Uncle! 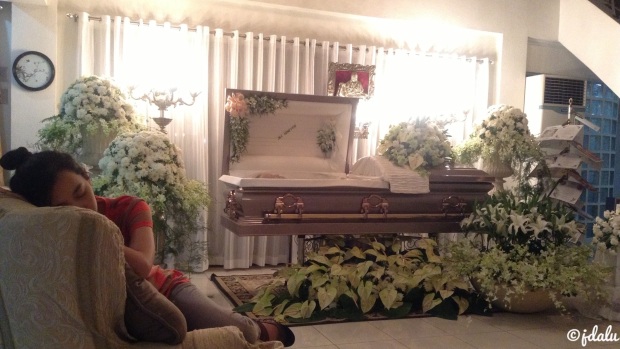 This is in response to Daily Prompt: Playlist of the Week.

Daily Prompt: Nightmares
Describe the last nightmare you remember having. What do you think it meant?

I have not been having dreams lately.
Maybe it’s because I always lack sleep recently (sleeping late and waking up early) that I almost always drift to non-REM sleeps every time I hit the sack.

But I am no stranger to nightmares.
It is most curious, however, that my nightmares do not have elements of fanstasy to it.
They do not involve monsters or fictional far away lands.

When I was young, I remember I would always wake up crying and scared to a dream wherein my mom would forget about me and leave me behind. She never did this in real life, of course. But I remember waking up with the feeling that what happened was so real. There was this one dream that my mother and I was trying to catch a jeepney. She carried me up the back entrance but she was not able to ride it herself and she was left behind. I remember I was crying so hard that even when I woke up, I was hollering like a baby with tears streaming down my face.

As an adult my nightmares were still about family. Now that I was the one who left them behind, my nightmares were about finding out that my family isn’t perfect at all. Well, I know it is not literally perfect. But for me, it’s as perfect as it could ever be and I could not wish for anything more.

However, I had this weird dream where we supposedly found out that my youngest sister had a different father than me and my other sister. I dreamt that my mother told us all about it and I cried. I woke up crying and heart broken. Heartbroken for me, for my sister, and especially my father.

I’m glad it was just a bad dream. But I hate how dreams have the power to make one thing feel so real. Not just the bad dreams, but also the good ones. You wake up either feeling so sad and scared for nightmares or so happy but devastated that it wasn’t true. 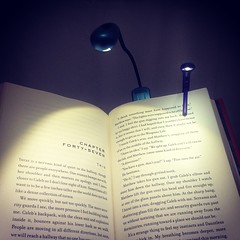 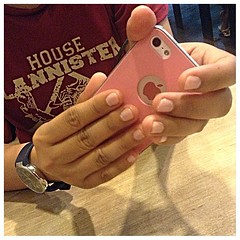 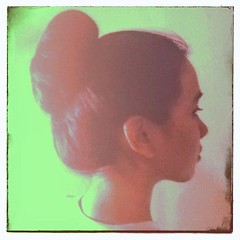 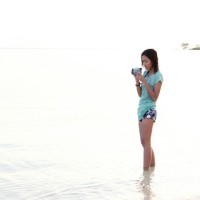 Discover how to cook seafood, why you should care about sustainability and maybe, just maybe, you'll find out where mermaids like to spend their free time ; )